The charge points have provided users with over 10 million miles of carbon-neutral motoring, studies reveal, and are working as part of the government’s ‘build back greener’ scheme, designed to cut carbon emissions.

Tesco’s partnership with Volkswagen and Pod Point has recently resulted in providing its 500,000th free top-up, a colossal achievement that has been welcomed by transport secretary, Grant Shapps:

‘As we accelerate towards a cleaner and greener transport future, it’s great to see one of Britain’s most iconic household names leading the way with electric vehicle charge points.

‘In the time it takes to pick up the groceries, drivers up and down the country can now quickly and easily charge their cars, and with £2.5bn of government support to encourage their take-up, there has never been a better time to switch to an EV.’

Further research into the effects of the partnership also reveals that the scheme has served to reduce carbon emissions by approximately 2,120 tonnes. James Robinson for the Mail Online suggests that this is ‘the same as or more than 2,770 acres of forest will manage in a year.’

Clearly, this is a huge step forwards for the transport industry and shows the extent of their efforts to do their part to cut carbon emissions. Director of Volkswagen, Andrew Savvas, commented:

‘Our partnership with Tesco and Pod Point emphasises our commitment to carbon-neutral mobility for all, and we’re delighted to have reached this milestone – helping owners of all-electric car brands top up with free renewable energy while they’re doing their grocery shop.’ 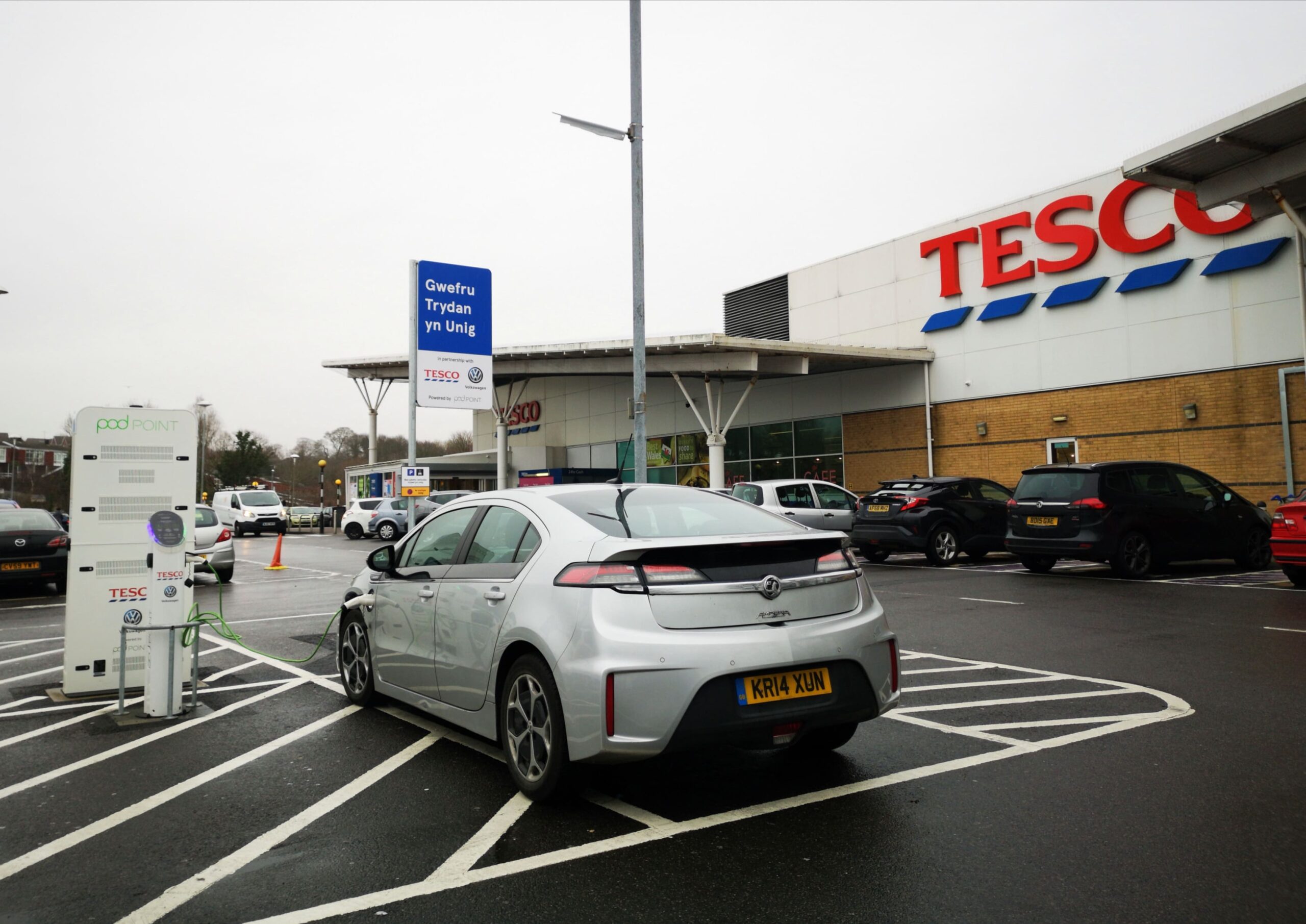 While over 600 Tesco stores now have free charge points, several have proven to be the busiest, indicating a higher up-take of electric vehicles in these areas. The top 5 busiest Tesco charge points were located in Slough, Stourbridge, Crawley, Altrincham and Bromley by Bow. These were closely followed by other areas such as Watford, Orpington and Hampshire.

It is clear that electric vehicle owners in locations up and down the country are making the most of these free charge points.

Chief operating officer at Tesco, Tony Hodgett, commented on the overall purpose of the partnership:

‘We are committed to reducing carbon emissions in all our operations and aim to be carbon neutral in the UK by 2035.

‘As part of this, we want to encourage our customers to play their part with the rollout of free-to-use EV chargers to 600 of our stores.

‘Providing customers with charging points offers them a sustainable choice, and giving them the opportunity to charge their car for free while they shop is a little help to make this easier.’

While Tesco’s partnership with Volkswagen and Pod Point is proving to be a positive contributor to cutting emissions, experts believe that charge point rollout is not in keeping with increased demand.

In fact, What Car? editorial director, Jim Holder, suggests that the number of charge point devices available needs to be at least 10- or 20-times that the current levels to cope with frequently increasing demand.

A report conducted by the Policy Exchange think-tank reveals that the number of public charge points currently stands at 35,000. They suggest that this will need to increase to 400,000 by 2030 to keep up with demand, especially when considering electric vehicle numbers in the UK currently stand at 108,205. This is already an increase of 185 per cent compared to 2019, highlighting the rate at which demand for charge points will accelerate in the coming years.

Despite this challenging statistic, however, Tesco’s partnership with Pod Point is leading the way for the challenge to be met:

‘The partnership is making great strides towards our goal of delivering the nation’s largest retail EV charging network – one that is reliable, accessible, secure and free, making it even easier for drivers to choose electric and accelerate adoption,’ says Pod Point Founder and CEO, Erik Fairbairn.

The UK has a legal target to reduce greenhouse gases to ‘net zero’ by 2050, and it seems that partnerships such as these will pave the way for that goal to be met.

Have you charged your electric vehicle at a Tesco charge point recently? Will Tesco’s partnership with Pod Point encourage you to make the switch to an electric vehicle?

Let us know your thoughts in the comments.

Somebody must be paying for this?

Needless to say, it won’t be free for long and maybe you have to spend over a certain amount in the store to get your charge free. Anyway my Tesco shopping takes about 20 minutes, how much charge could I get in that time.
However 5 minutes at the pump on the way out gives me a 500+ mile range.

5 minutes gives you 60 miles in a new Kia EV6. You clearly are one of those negative to a greener future. Let’s be honest, how often do you travel 500 miles without taking a 30 minute break!

it’s free now, but then Tesco’s will realise that they can maintain giving it for free, so at some point when the Accountants say that it’s eating into the profits, Tesco’s will start charging you (no pun intended! LOL)

I’ve been using my local one for over 6 months now and it is great. Hopefully they will remain free however a small charge is still cheaper than fuel and less polluting. Well done Tesco/Volkswagen, leading the way! The truth is though that the government need to spend to put in the infrastructure as well as an easier ‘all in one’ charging network, as it is still nowhere near what it needs to be. However, this is a great start.

wow just been to my large Tesco Store only 2 chargers waste of time.

Its a small positive, schemes like Just Park putting EV chargers from domestic charge units on Zap Map is going to be bigger.

Yes, very much so. I am seeing a lot of new chargers going in around my city, in fact, the shopping centre Meadowhall has recently installed and upgraded a significant amount of chargers.

Superb development from Tescos. I have seen similar from M&S albeit on a smaller scale. I can see unused sites in and around industrial estates and office estates being turned over to charging, so those that work there can charge throughout he day, picking their car up at the end of a working day.

Why oh why can’t simple charge points be made so anyone can charge their car just with a credit/debit card and not have to have a smart phone or special access card.? Also points that charge at a higher speed to emulate a petrol pump scenario. Now that would be ultimately more sensible to speed up usage and not then require so many outlets.