Drivers continue to risk lives with mobile phone use

We all witness poor driving every time we use the roads, whether we’re also driving, are on foot, or on our bikes. My kitchen window overlooks a bit of a rat-run and I lose track of the number of drivers passing by clutching mobile phones—particularly delivery drivers—and if new data is anything to go by, I’m not alone in what I see.

In 2017, after a spike in deaths caused by motorists driving while using mobile phones, the government introduced strict new laws regarding mobile phone use behind the wheel. Yet despite the harsher penalties, the RAC’s recent Annual Report on Motoring shows mobile phone offences remain the top concern of motorists. 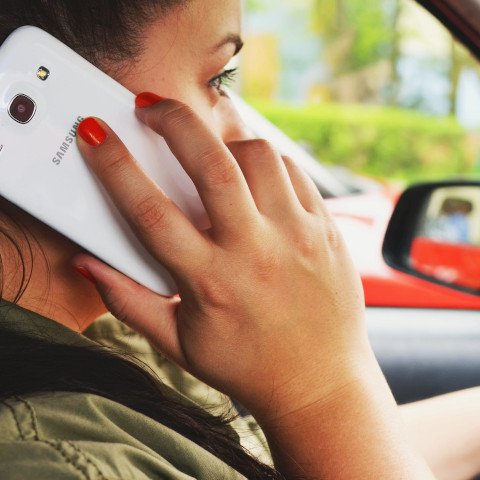 Campaigners for road safety and MPs say record levels of road congestion and a lack of traffic police is the reason around 10million drivers continue to reach for their mobiles—to relieve the boredom of sitting in traffic.

According to the motoring organisation’s annual report, 23% of motorists confessed to still making or receiving calls on a hand-held phone while driving. The figure shot up to 51% of drivers between 17 and 24 years of age. Thirty-five per cent of the same under 25-year-olds age group said they checked email, social media, and text messages while driving. That percentage alone is terrifying, but even more so when you learn that this selfish and unnecessary move can up the chances of an accident by up to 24 times. In drivers over 25 years old, the figure was a lower, yet still worrying, 17%.

Government advice is that we should keep our mobile phones in our car’s glove compartment, but the RAC’s survey of 1,753 motorists discovered that only 15% are heeding this warning—25% say they keep their phones on the seat or the dashboard, instead, and 24% admitted to leaving their mobiles on audible, increasing the chance of distraction.

To compound matters, the number of Traffic Officers in England and Wales dropped from 3,766 in 2007 to 2,643 in 2017—that’s almost 30% over just a decade. In contrast, data from the Department for Transport reports that traffic congestion in Britain increased by 6.5% in the past ten years.

‘In 2017, there were 773 casualties—including 43 fatalities and 135 serious injuries—in road traffic collisions where a driver using a mobile phone was a contributory factor.

‘Every one of these casualties could have been avoided if drivers had been paying attention to driving and not their phone.’

Tim Rogers, the lead on roads policing for the Police Federation of England and Wales, said:

‘Often they’re doing it in traffic, but inattention at any speed is lethal. These people will say they rarely see police on the roads, that they’ve never been stopped by police, so they perceive no risk in doing it.’

‘There’s also a problem with chief constables who cut dedicated traffic officers then claim “all our officers are traffic cops”.

‘Why do we accept it is OK for six people a day to die on our roads? It’s certainly not acceptable. We need more traffic police to reduce the number of causalities [sic] on our roads.’

The RAC says that the first thing the police need to do is catch mobile phone offenders in the act, but they also want both the government and the police should look into cars having the technology that can enforce the law against using hand-held devices while operating vehicles.

To stay within the law while driving or riding a motorcycle you must have hands-free access to your mobile (although MPs are proposing a ban on all hands-free devices in cars) or sat-nav and use a Bluetooth headset, voice command, a dashboard holder or mat, a windscreen mount, or a built-in sat-nav and the same applies whether you’re stopped at traffic lights, sitting in traffic, or are supervising a learner driver.

Unless circumstances dictate otherwise (like your job), the best bet is to keep your phone in your glove compartment, on silent. It’ll be near enough to you in an emergency. Research also shows you’re a better driver when driving in silence but if that bores you to the point of phone temptation, maybe consider the radio or an audiobook—or perhaps listen to Led Zeppelin?

Any device you use mustn’t block your view of the road ahead and you must stay in full control of your vehicle at all times. If the police stop you because they think you’re distracted or not in control, you could face prosecution.

While police numbers are down, in 12 months of ‘Operation Tramline’ alone, officers across the country in three so-called ‘supercabs’ caught and recorded motorists committing 1,062 offences of using hand-held devices while driving.

And, yes, modern life is busy but nothing on our phones is worth incurring penalty points, a fine, a prison sentence, or losing your licence. Even less so if it means risking your life.

Do you agree with the RAC’s findings? Have you noticed fewer police cars on the roads? Tell us your thoughts in the comment section.

Just another way for greedy coppers to notch up their prosecution bonuses. Will they stop us from talking to our passengers ? What about Taxi drivers? will they have to get out of the Taxi to ask their client where they want to go or ask for the fare??? Lilian Greenwood MP, a minister without a brain.

It’s morons like you who make articles like the one above a reality. Are you a brain donor?

just today returned from Texas usa today on the overnight flight from houston, currently 2876 people have been KILLED
on the texas roads in the last 12 months. if you want to see bad driving/speeding/tailgating and jumping in and out
of traffic flows go to texas. ##

When a very stupid lorry driver collided with vehicle whilst he was looking down at his phone he should of got a life sentence for murder.
My car is fitted with handsfree so I don’t need to touch my phone to answer a call. The buttons are on the steering wheel.
At present I don’t see a problem answering a call. I see a problem with someone scrolling through their contacts on a screen mounted in the dash.

Harder penalties needed, 6 points does not deter people and even if they ‘tot’ to 12 points they can still argue to stay driving.
The only way is to impose a 28 day outright BAN for this offence, Magistrates can be given the power to do so (it already exists for speeding offences over 100mph).
That would concentrate the mind especially when they get their insurance renewal – if they can get one !

I wished I found my phone as interesting as it seems every one else is , what is so fascinating about them , all I ever seem to get is spam e mails and other inconsequential rubbish and as for apps ….

There is no deterrent….. people can get away with using their mobile phones because there are not enough traffic police watching those that are breaking the law…… this includes those that ignore the speed limits.

Apart from ignoring speed limits I am constantly seeing red lights ignored, not using indicators and breathtaking selfishness towards other other road users.

As there’s no specific offence detailing the inappropriate use, or failing to use signals / indicators, then technically it’s legal to not indicate, however should you cause an accident by failing to indicate your intention then you could be prosicuted for Careless Driving

Sorry Gwen. You must be really stupid. Police don’t gain bonuses for picking-up characters like you breaking the law. As for holding discussions with passengers, one only has to watch TV presenters interviewing their personalities whilst driving, to realise they cannot have their mind on what they are doing. Taxi drivers get their instructions before they start driving and ask for the fare when they stop.. Sorry love. You’re the one without a brain – not Lilian Greenwood, MP.

Using a mobile while driving should be an instant ban

I’m in total agreement! The number of people with phones held to their ear or looking at Faceache or whatever it is they are looking at on their device whilst driving is astounding! They should be treated like drink drivers & receive an instant ban!

Traffic police are rarely seen on the roads of Sussex. As a regular user of the A27 I am frequently undertaken and tailgated on almost every journey I make on this road. The lack of a visible police presence results in this type of driver behaviour as there is no possibility of offenders being caught.
Nothing will change until roads policing becomes effective as it once was. Until then people will continue to die, be seriously injured and crash their vehicles.

Effective roads policing is the obvious answer. As a regular user of the A27 my journeys always include being overtaken by speeding drivers, being undertaken and tail-gated. No evidence of police so some drivers know they can do as they please without any possibility of being caught.

Government policy was wrong from the start .Take the vehicle and the phone Destroy the phone with all it contains but return the car after a few months then most would have learnt not to use their mobile when drivinr

No Police, they’re not interested anyway and symptomatic of current poor driving generally.

At 70 plus mph on the M6 yesterday I felt I was standing still with the speeds. As stated earlier, no indicating, no care for other drivers, no patience and simply harassment when you toot anyone who simply pulls out in front of you.

Watched a couple of traffic police programmes recently. In a couple of cases the cop behind the wheel was using his radio with one hand steering with the other – no hands free and at quite a speed! A didn’t look in control to me. Do the same rules apply?

A very good question John. Will emergency vehicle drivers (often exceeding the speed limit of course) be exempt from any new law? Indeed, are they already exempt from existing ‘hand-held’ phone laws?

Caught using a hand held while driving . Vehicle crushed , no appeal , It’s unbelievable what you see on the roads . Never mind concentrating on the drunk drivers , phone addicts are a way more dangerous hazard .

Use your dash cam for something worthwhile – when you get one of these morons in your sight, copy the part showing them complete with numberplate and pass it to the easily findable Web site.

Linda
Reply to  John B

Wouldn’t that cause a distraction for the dashcam operator?

Yes there appears to be less police on the roads and more drivers are using hand held phones. Only Friday last week I slowed down on a country road to let an ambulance on blues to pass a tractor and trailer coming in the opposite direction, looking in my mirror it was obvious that the pick-up behind me was not slowing, he eventually realised that I was virtually stationary and had to take to the grass verge to avoid my car. It looked like he was texting on his phone. I hat to think what would have happened if this had been in a town and there had been pedestrians about.

I rarely use my mobile phone phone in the car. If I do I use hands free, and then only for a minimum conversation. I was recently picking up friends from Heathrow, in unusually heavy traffic. I had already set them up as the default call, so I did not have to scroll. Even so, just before I joined the M3, I warned them I would not be using the phone until I left the M25, at the airport. I was not prepared to be even minimally distracted on the motorways.

Yet it is not unusual to see van and lorry drivers with a handheld phone to their ear, even on motorways.

It’s not just about the points on your licence. Remember this?
https://www.theguardian.com/uk/2009/sep/03/gwent-road-safety-film

wpDiscuz ← Electric cars: The most frugal motoring? ← Forget VED, we could soon be paying per mile