Over the last two months, new roadside cameras have been trialled on the M1 in Northamptonshire, designed to catch and warn tailgaters about their dangerous driving habits.

Since October, 26,000 tailgating drivers have been identified, equivalent to 419 per day. These were drivers of any trucks, vans and cars that were deemed to be to be deliberately flouting the Highway Code’s two-second minimum gap.

It has even been reported that of the total, 3,700 drivers were repeat-offenders, tailgating up to 12 times.

The new cameras, developed by Aecom, were installed along a 150 metre stretch of the M1 and operate in a very similar way to speed cameras. They identify and record number plate details that can then be used to issue warnings to offending drivers. In this case, the warning will be in the form of a letter.

The new technology also allows for readings of drivers’ distance-keeping to be recorded to determine whether the tailgating is accidental or deliberate. Only in the case of deliberate tailgating will warnings be issued.

Currently, Highways England is in the process of analysing whether or not these warning letters are having a positive impact on driver behaviour. If the results indicate this to be the case, the trial will be deemed successful, and the cameras will be rolled out across England.

Highways England wants to remind drivers of the consequences tailgating can have and said: ‘Tailgating is a factor in one in eight casualties on the strategic road network.’

It has also recently been reported that, according to new data from the Department for Transport, serious incidents caused by tailgating have soared to their highest level for at least seven years. Particular concerns about HGVs have been raised, with growing numbers of these vehicles tailgating on stretches of motorway where the speed limit is reduced to 50 or 60mph.

With this in mind, Highways England’s head of Road Safety, Jeremy Phillips, has said that these cameras have been put in place to ‘make drivers aware of their behaviour and encourage better driving.

He stated: ‘These new cameras have, sadly, highlighted just how many people are driving too close on our roads.’

While he understands ‘that most tailgating is unintentional by drivers who are simply unaware they are dangerously invading someone else’s space’, he also wants to reinforce just how dangerous tailgating can be.

‘Not leaving enough space between you and the vehicle in front can be very frightening and intimidating – it could also prove fatal.’

However, it is also important to say that while the new system does work in partnership with police, the organisation is not looking to persecute drivers. Instead, it intends to reinforce the message to leave a gap between vehicles. 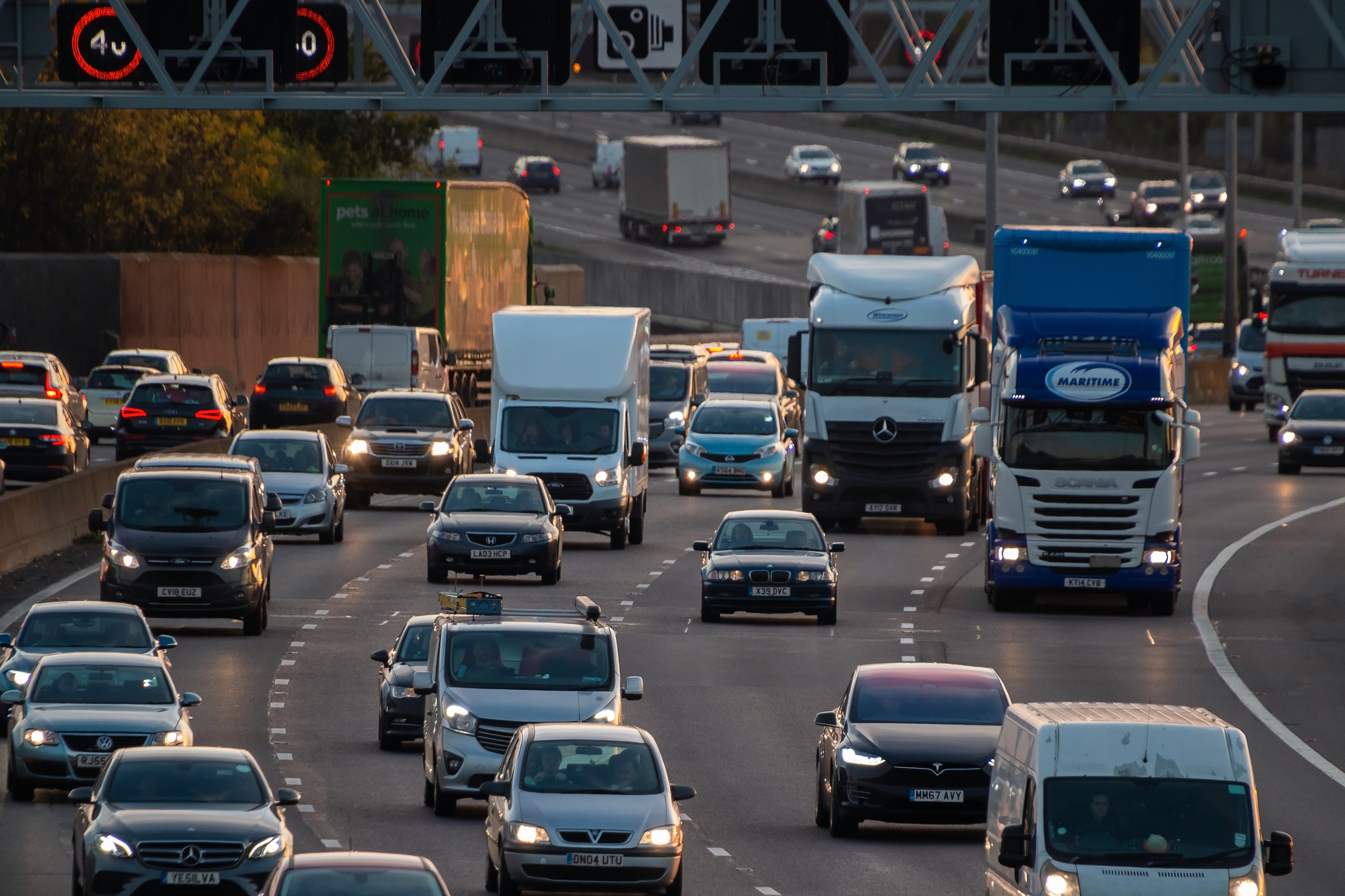 So, what is the two-second rule?

The Highway Code states that, at all times, drivers should maintain a two-second gap between themselves and the vehicle in front. In wet conditions, this should be doubled to four seconds.

The Driver and Vehicle Standard Agency’s Chief Driving Examiner, Lesley Young explains that ‘keeping a big enough stopping distance is crucial to staying safe, particularly in fast-moving traffic when you have less time to react. Always allow at least 2 seconds from the vehicle in front, and at least double in bad conditions.’

While the rule may appear simple, there are frequent and rising reports from motorway users of dangerous tailgating. One of these reports comes from Data and Intelligence Analyst for Highways England, Caroline Layton. In describing her experience of being the victim of hazardous tailgating, she said she feared she would be crushed by a lorry continually driving too close to her vehicle on the M27, near Southampton.

She expressed her distress to The Times, explaining ‘he came up really close, just a couple of metres behind. I thought I had to slow down because if it hit me at 50mph, I would be crushed. This was very intimidating behaviour and likely to cause a crash and serious injury.’

She concluded by warning: ‘if anyone had stopped in front of me, he would have gone into the back of my car and I would have been sandwiched in the middle.’

This experience, and many others like it, have forced Highways England to take action with the installation of these new cameras. They hope that, if this trial is successful, the cameras will be used nationwide to drive down dangerous tailgating behaviours on our roads.

Have you been the victim of dangerous tailgating? Do you think these new cameras will eliminate this potentially fatal behaviour?

I am afraid that tailgating is certainly becoming more prevalent. I regularly accelarate away and turn on hazrd warning lights to
try to dissuade drivers who are too close when the opportunity obtains. On less busy roads I will continually slow down. I was told ” 1 car length for every 10 miles an hour” by my driving school in 1957. Traffic has increased considerably since then. I am told that a “domino” crash on motorways is caused by tailgating. I find it’s mainly young drivers who think their reactions are faster than they actually are. I also notice young females are regular offenders. Tailgaters should be fined with impunity on detection.

So, on “less busy roads”, where there is no excuse for going too slowly, you find someone close behind you, awaiting the chance to overtake (because you’re going too slowly), and your response is… “to continually slow down”!! About the worst, most antagonistic response you could come up with under the circumstances. What do you think you’re playing at…

Basil, who are you to decide that a driver is going to slowly if I think that the road conditions are such that I’m uncomfortable doing more than 40 mph then that’s my decision, not yours. However, if it’s a 60 mph limit and the conditions are good then, as per the IAM guidance, I will make progress, ie drive to the limit if it is safe to do so.

Absolutely Mike. There is this insane idea that drivers have to go as fast as they can until the catch the car in front. Often used to intimidate drivers into moving over and they then don’t give enough space when then pull in front of the driver in the next lane. We should be able to submit video footage so that these drivers are prosecuted.

‘Only a fool breaks the two second rule’.

The only problem with trying to stop tailgating is that the gap left by intelligent drivers is often used by idiots who leave turning in too late and filling the gap, thereby creating a situation where you are inadvertently too close to the vehicle in front. For example those who want to take the next motorway exit and race down the outside lanes and then pull in at the last moment, instead of moving into the inside lane when the signs indicate the approach to the exit. Another is where a driver, apparently trying to obey the highway code, pulls into an ‘inner’ lane and again, fills the two second gap you’ve left. While I support the intention of using cameras to stop tailgating, it does need to take into account the actions of others.

Unless these cameras are followed up with a prosecution they will have no more effect than fixed warning signs or painted distance chevrons etc. I was taught on advanced lessons to keep up to the speed limits wherever possible safely so anyone tailgating me in an attempt to get me to go faster is fully intent on breaking the speed limit so is not going to take notice of any warnings unless they are followed up with a fine and penalty points like safety cameras do.

Yes, concurring with both Mike L and the article itself… appears to be HGV’s in roadworks areas (eg. 50mph) who think they’re king’o’the road at 6ft behind you (?!); likewise lads/ladettes who think they have something to prove in their ‘hot’ hatches. Safe/smug/superior in their respective metal boxes….alone down a dark, back alley may be a different story 😉

Whilst it is laudable to target tailgating, one should not forget that there are many other variables involved, such as, the driver of the vehicle in front driving slower than the specified speed and not allowing vehicles behind the safe option of overtaking, vehicle hogging usually lane two of the motorway in the belief that they own that lane and refuse to move into lane one after making an overtaking action as posted in the highway code. Unlike in the 1960’s when motorways were introduced and initially there were not any speed limits as most cars could not maintain a speed of 70 m.p.h., it was only the fact that sports cars such as the E-Type jAG could attain 120 m.p.h. that the Government of the day introduced the 70 m.p.h. national limit. Today drivers attention has to compete with the radio, passenger conversation, mobile phones, overhead gantry speed limits, road signs etc where attention is in very short supply!!! To make out that younger drivers are to blame is somewhat naive, as there are many variables such as, rushing to an appointment, job interview etc, the research shows that there is a mixture of drivers ages that tailgate and a myriad of reasons given . The area of decision-making whilst under-uncertainty highlights these variables.

If I have someone too close to me, I flash the brake lights. If they don’t keep back, I take my foot off the accelerator and let the car slow until they get the message.

Ice should be doubled? Perhaps someone should read https://www.gov.uk/government/news/highways-agency-warns-tailgaters-that-only-a-fool-breaks-the-two-second-rule

Many car drivers forget that lorry drivers will have a clearer and better view of whats ahead because of their elevated driving position, and will be breaking far more quickly than the cars in front as they will see the danger quicker than the the car driver.

Barry what load of old tosh! So that lorry driver can see that child running out from between parked cars, got x-ray vision has he? Run into the back of someone and it’s your fault, all down to driving too close because you’re a numpty

Whilst I agree that tailgating is a danger which needs addressing, there are millions of vehicles which can legitimately be driven by more than one individual. The only way to identify the driver is to issue a RTA S.172 notice. A number plate only traces to the Registered Keeper. Are such notices being used in every case prior to sending the warning letter? If not, the latter is not only a toothless tiger but it can unfairly stigmatize the wrong person.

“Send them a letter”? – NO! – take away their licences for 12 months if they cause an accident or on a second “warning” occasion and ban for life on a third.

wpDiscuz
15
0
Would love your thoughts, please comment.x
()
x
| Reply
← Mercedes owner shocked to see car stripped apart by thieves ← Speeding tickets set to become a thing of the past as self-driving vehicles liable for speeding offences